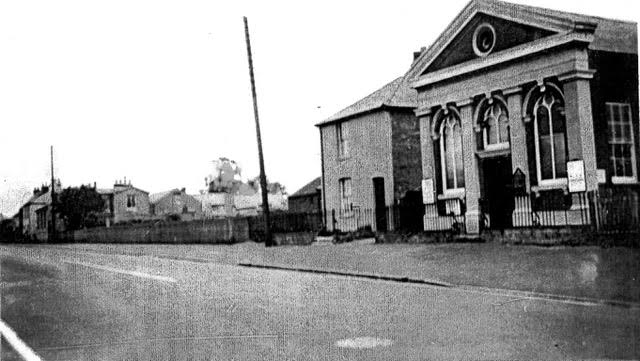 There has been Baptist Witness in London Colney for over 200 years,

London Colney Baptists started by meeting in the home of Mary Gee, a worker who lived in the Napsbury Hospital grounds. In 1812, after the formation of the Hertfordshire Union of Baptists, a preaching station was established in London Colney under the care of Dagnall Street Baptist Church.In 1875 a purpose built chapel was built in the High Street and this remained the home of the church until 1960.

Dagnall Street continued to be the mother church until May 1939 when London Colney became independent and entered into an agreement with Park Street for a joint ministry. The minister being Mr F. Bateman. This continued until August 1943.

In February 1944 the Rev J. Samuels was called to the Pastorate of an independent London Colney and remained in place until his death in 1947. He was followed by Rev South who was called for three years and whose Pastorate was not renewed in 1950.

Following Rev South Mr E. Wells (Church Secretary) was invited to be the Moderator and one year later he became the Lay Pastor, initially for three years, and continued unto 1971. In April 1971 Rev Bryn Little was called to be a part time minister whilst continuing to work as a Disability Placement Officer. He continued until retirement in 1982.

Rev Little was followed by Rev J. Brian Edwards who was in full time employment and worked for the church as a supplementary minister (that is he gave his spare time to minister receiving only expenses/ honorarium).

Rev Edwards gave the church 10 years of his time and following his resignation the church called Jeff Boyden to become a student pastor for one year as he finished his studying at London Bible College. On completion of his course Jeff stayed at the church as part time pastor. Due to circumstances he returned to full time studying at Regents College and became a student pastor at London Colney once again. This continued until he finished his course in 2002. Jeff moved on to full time ministry at Cottenham following his ordination. After 2 years without a minister, our student pastor Peter Laws joined us in October 2004. Rev Peter Laws spent 6 years before moving on at the beginning of 2011 to develop his love for writing and preaching.

During the Autumn of 2011 the church called Rev Adrian Wood to be the Pastor. He had completed his Theology degree at Spurgeon’s College earlier in the Summer and during this time he was the Student Minister at Dagnall Street Baptist Church in St Albans.

Today we have quite a broad diversity of nationalities within the church, with people that have backgrounds from Ghana, South Africa, Sri Lanka, Mauritius, Ireland, Pakistan, Zimbabwe and England, and quite a diversity of church backgrounds with people who have grown up within Pentecostal, Catholic, Presbyterian and Church of England traditions as well as Baptist of course.